You are here: :Home/Uncategorized/LOVE AND MARRIAGE EQUALITY
Previous Next 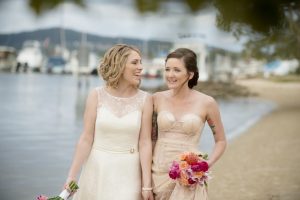 It was exactly two years ago when these two gorgeous ladies, Katie and Lyndsay, said ‘I DO’. On that bright, sunny, 29th August afternoon in beautiful Noosa, the two nurses from Townsville made this ultimate promise to each other: “I will commit to loving and caring for you for the rest of my life.” Their personal vows were beautiful, tender and funny. It was a wonderful celebration in the presence of their joyous family and friends with lots of excitement, laughter, and tears. I felt privileged to be their celebrant.

But, of course, it was a ‘love commitment’ ceremony, not a wedding ceremony. The only real difference between the two ceremonies is that celebrants are not allowed to utter the formal wording that makes the marriage binding under Australian law. Because, sadly, a legal marriage between two people of the same sex is still forbidden in this country.

Thinking back to their celebration, I remember asking Katie and Lyndsay if they wanted me to make a statement about marriage equality during the ceremony. They thanked me but said ‘no’. Understandably, they felt their ‘Big Day’ was not about making a political statement – it was just two girls in love making a life-long commitment to each other. But, with their fingers crossed, they told me they hoped to be able to do the ‘legal bit’ sooner rather than later. 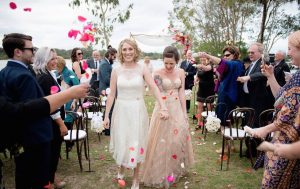 Fast forward two years and these two young women are still sadly waiting. They are forced to witness this sometimes unpleasant public debate about marriage equality. I understand that marriage can mean different things to different cultures. There are faiths that do not recognize same-sex marriage, allow divorcees to marry or believe that couples should live together before marriage. I have no problem with these religious beliefs, they are just not mine. In Australia, over 75% of marriages are civil ceremonies conducted by marriage celebrants – not by religious ministers.

Like Katie and Lyndsay, I fervently hope that this great country of ours will finally catch up with the many other enlightened nations that have already legalised SSM. It is what the majority of Australian people want. A legal marriage does give a couple important ‘next of kin’ status but more importantly, in the case of same sex couples, it says clearly that society does not discriminate against their right to marry the person they love.

Hang in there, Katie and Lyndsay, I hope to have the pleasure of legalising your union very soon!

About the Author: Patricia Quinn